add this
West Highland Terrier at doggieplanet - dogs trust Emersons finest
Here at doggieplanet we sell Emerson’s Finest dogfood, a premium natural healthy pet food. We are based in Hornchurch near Romford Essex; we deliver free to all local areas in England & Wales. We are providers of a more natural petfood for West highland Terrier'  that is good for the breed and great food that aids growing & development, of skin, bone, muscle, and temperament. The dry kibble is hypo-allergenic & perfect choice for puppy, adult & senior dogs. We also provide a grain free and allergy control variants. Gun dogs and working dogs are also catered for with our range of prime meat, muesli, cereal and fish based foods. Free of artificial ingredients and made in the UK. 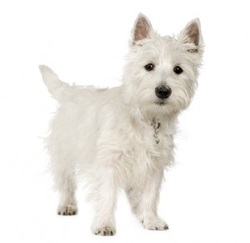 West Highland Terrier at doggieplanet
West Highland White Terrier
The West Highland white terrier, often simply called the Westie, is a small, sturdy dog. The head is in proportion to the body and when viewed from the front gives off a round appearance. The blunt muzzle is slightly shorter than the skull and tapers toward the nose. There is a defined stop. The nose is black. The teeth meet in a scissors bite with teeth that are large in proportion to the dog. The almond-shaped, deep-set, dark brown eyes are set wide apart. The ears are erect, set wide apart on top of the head and triangular in shape, coming to a point. The legs are somewhat short but not too low to the ground. The undocked tail is relatively short, about 5-6 inches (12.5-15 cm) long, thicker at the base and tapering to a point. Dewclaws are sometimes removed. The double coat has a straight, hard outer coat that is about 2 inches long (5 cm) and a soft, dense undercoat. The coat color is solid white.
The West Highland White Terrier is a game and hardy little terrier that is easy to train. It is fairly friendly toward strangers and gets along well with children. Easy dog to travel with. These dogs are lively and extremely self-assured toward other dogs, but will not pick fights if their owners know how to display proper leadership. They may chase a cat for fun, and need to be corrected if they do attempt this. Robust, friendly and spirited, Westies just love companionship. Despite their size, they make a very good watchdog. The Westie likes to dig and bark. If a Westie is allowed to become the pack leader, it may snap when irritated and be combative with other dogs. A lack of leadership on the owner’s part can cause many behaviour problems, such as biting, guarding food and furniture. A Westie that has an owner who knows how to display firm, confident, consistent, leadership will not experience these behavioural problems. These problems can be corrected once the owner becomes the dog’s true pack leader. Do not allow the Westie to develop Small Dog Syndrome.
Height: Males 10 - 12 inches (25 - 30 cm) Females 9 - 11 inches (23 - 28 cm) Weight: Males 15 - 22 pounds (7 - 10 kg)  Females 13 - 16 pounds (6 - 7 kg)
Prone to chronic hernias, liver disease Legg-Cavé-Perthes syndrome (hip problems), jawbone calcification, cherry eye and skin problems. West Highland White Terriers are suitable for people in towns and cities as well as in the country. They are very active indoors and will do okay without a yard. These little dogs need a daily walk. Play will take care of a lot of their exercise needs, however, as with all breeds, play will not fulfil their primal instinct to walk. Dogs that do not get to go on daily walks are more likely to display behaviour problems. They will also enjoy a good romp in a safe, open area off lead, such as a large, fenced-in yard.
Life expectancy about 15 or more years.
The harsh, straight, shorthaired double coat is fairly easy to groom and sheds little to no hair. Simply brush regularly with a stiff bristle brush. Brushing should keep the coat clean, so bathe only when necessary. Trim around the ears and eyes with blunt-nosed scissors. The whole coat should be trimmed about every four months and stripped twice a year. The West Highland White Terrier originates from Poltalloch, Scotland, and was once called the Poltalloch Terrier and later was called the Roseneath Terrier, named after the Duke of Argyll’s estate. The breed came about in the mid-19th century when a Scottish breeder of the Cairn terrier whelped some white pups in his litters. Those pups were selected and bred to obtain the West Highland white terrier, which is simply a white Cairn. The West Highland was first shown in the USA in 1906 and first recognized by the Kennel club in 1908. In 1909 the breed’s name was changed from the Roseneath Terrier to the West Highland white terrier. Like the Cairn, the Westie was originally bred for controlling the population of rats, fox, badger, otter and other vermin.
Terrier Group