add this
Airedale Terrier at doggieplanet - dogs trust Emersons finest
Here at doggieplanet we sell Emerson’s Finest dogfood, a premium natural healthy pet food. We are based in Hornchurch near Romford Essex; we deliver free to all local areas in England & Wales. We are providers of a more natural petfood for Airedale Terrier'  that is good for the breed and great food that aids growing & development, of skin, bone, muscle, and temperament. The dry kibble is hypo-allergenic & perfect choice for puppy, adult & senior dogs. We also provide a grain free and allergy control variants. Gun dogs and working dogs are also catered for with our range of prime meat, muesli, cereal and fish based foods. Free of artificial ingredients and made in the UK. 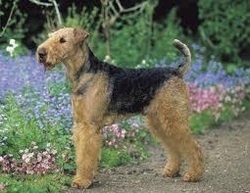 Airedale Terrier at doggieplanet
Airedale Terrier
The Airedale Terrier is the largest of the terriers and stands square in appearance.
The skull is about the same length as the muzzle, with a very slight stop that is hard to see. The head is long and flat. The nose is black. The teeth should meet in a level, vice-like or scissors bite. The small eyes are dark in color. The v-shaped ears fold slightly to the side of the head and forward. The chest is deep. The topline of the back is level. The front legs are pefectly straight. The tail is set high on on the back. The double coat has a hard, dense and wiry outer coat with a soft undercoat. Coat colors include tan and black and tan and grizzle. The head and ears should be tan, with the ears being a slightly darker shade of tan. The legs, thighs, elbows and the under part of the body and chest are also tan, sometimes running into the shoulder. In some lines there is a small white blaze on the chest. The back of the dog, sides and upper parts of the body should be black or dark grizzle in color.
The Airedale Terrier will usually do okay with children if they have early exposure and socialization, however the may play too rough for very small ones. Courageous and protective. Fairly friendly with strangers. Intelligent, pleasant and loyal. Sensitive and responsive, he can be obedience trained at a high level. Airedale Terriers are fun-loving and playful when they are puppies. Airedales will be happy to please you, if there is nothing more pressing in the
environment (chipmunk, other dog, food). An Airedale is extremely loyal, but as an avid hunter you would have to be an ace trainer to get him to come away from a chipmunk even for raw steak! They are naturally lively and can be very rowdy if they do not receive enough daily mental and physical exercise. Train this dog not to jump on humans. The Airedale Terrier needs proper obedience training and an owner who knows how to be "Top Dog". The Airedale Terrier may have dominance challenges toward family members he sees as submissive. This can lead to willfulness and disobedience. They are not difficult to train, but they do not respond to harsh overbearing training methods. The Airedale Terrier is intelligent enough to perceive quickly what is required of it, but if you ask it to do the same thing over and over again it may refuse. Try to give it some variety to its training, making the exercise a challenge. They need a calm, but firm, confident and consistent handler. With the right handler, the Airedale Terrier can do well in various dog sports including defense dog trials. This breed generally gets along well with household cats and other animals, but they sometimes try to dominate other dogs. This depends upon the way the humans around the dog treat him, their training and the individual dog.
Height: Males 22-24 inches (56-61 cm.) Females
22-23 inches (56-58 cm.)
Weight: Males 50-65 pounds (23-29 kg.) Females 40-45
pounds (18-20 kg.)
Life Expectancy About 10-12 years.
Litter Size Average of 9 puppies
A very hardy breed although some may suffer from eye problems, hip dysplasia and skin infections. If your Airedale Terrier has dry skin, he should be fed an adjusted omega-6/omega-3 fatty acid ratio in the diet.
The Airedale Terrier is not recommended for apartment life. They are very active indoors and will do best with at least  an average-sized yard.
Airedales have a hard, short-haired, double coat. The hair should be plucked about twice a year, but for dogs that are to be shown, much more intensive grooming is needed. Trim excessive hair between the pads of the feet when
necessary. If you keep the coat stripped it will shed little to no hair, however if you do not strip the coat, you will most likely find fur piles around your baseboards, even with trimming, and brushing almost every day. They actually
require a good bit of grooming. Burrs stick in the coat and beard. The beard should be washed daily because of food residue. Airedale Terriers can be good for some allergy sufferers.
The first Airedales looked completely different from the Airedales of today. They were originally known as the Waterside and Bingley Terriers, descended from the now extinct black-and-tan type terrier. The breed was later crossed with the Otterhoundto make him a better swimmer. It is also said to have Manchester Terrier in its blood.
They were developed about a hundred years ago in the country of York from the ancient Working Terrier. The Airedale is often called "The King of Terriers,". The breed was used as a vermin hunter and was named for the Valley of the Aire in England, which was heavily populated with small game. In addition to his role as a small game hunter, the Airedale has been used to hunt big game in India, Africa, and Canada. The breed was also used as a police dog and a wartime guard in World War II. Today the Airedale is primarily a companion dog, but there are still working lines out there. Some of the Airedale's talents are guarding, watchdog, hunting, rodent control, tracking, military work, police work, and competitive obedience.