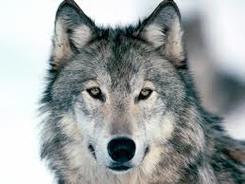 The Wolf's Diet
Wolves are carnivores, meaning they live almost exclusively off of meat. When hunting in a pack, wolves often try to capture and kill deer, moose, caribou, bison, wild sheep, wild goats or musk oxen, and these large ungulates (hoofed animals) make up most of a wolf's diet. Although wolves hunting in packs tend to capture such large prey items, lone wolves will on occasion bring down a large hoofed animal or one of its calves. During spring, wolves often prey upon juvenile ungulates. Wolves will also eat smaller animals like beavers, rabbits, hares, voles, fish, muskrats, lemmings, raccoons, shrews, marmots, woodchucks, shellfish, ground squirrels, mice and birds. In many parts of North America, beavers make up a large part of wolves' diets. Wolves hunting alone often catch such animals. Wolves will also eat animal carcasses they have found but did not kill themselves. Wolves will also eat insects, earthworms, or garbage and, when especially hungry, vegetable matter, such as berries or nuts, though none of these items make up a significant part of a wolf's diet. They will also eat grass as a purgative. Wolves will sometimes turn to eating domestic livestock as well.